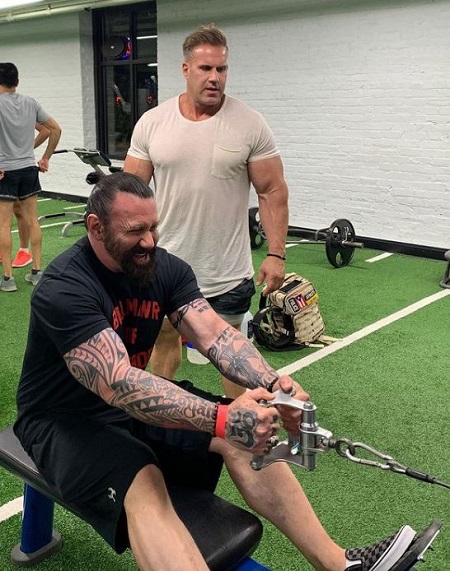 Jerry Ward, a professional bodybuilder, trainer, judge, coach, businessman, Youtuber, and fitness guru from America, was born on December 12, 1975, at the age of 46. He served as a role model for many young bodybuilders since he shared his success story and inspired others.

Jerry Ward spent three decades working in the bodybuilding industry. Jerry possessed a wealth of information regarding diet, exercise, and other bodybuilding-related topics. He has trained numerous young men to become competent bodybuilders throughout his life. The bodybuilding community, however, is in pain as a result of the terrible news that Jerry Ward passed away on July 22, 2022.

Who was bodybuilder Jerry Ward?

Jerry was both a bodybuilder and a coach. He passed away on July 22, 2022. Promoter Gary Udit has confirmed the news of his death. Gary wrote on Instagram that Mr. Jerry Ward, a fantastic bodybuilder, had passed away. Jerry told his pal that he might have torn his left rib, claims Mr. Dave Palumbo of RX Muscle.

Jerry’s rib injury is thought to have occurred after he carried his luggage to his residence last week, according to Mr. Palumbo. Jerry tried using a massage chair to get some relief from rib pain, but it didn’t work and made things worse. Jerry’s friend advised him to visit a doctor, but he preferred to sleep instead, and when he didn’t wake up, he passed away.

Since Wikipedia did not list Jerry Ward, we published information from his Facebook profile. He was born on December 12, 1975, in Warren, Rhode Island, according to his Facebook page. He started bodybuilding at the age of just 14 after being excited about having large muscles and a body as he approached his adolescent years.

Ralph, his coach, began providing him with training at that point. Jerry was inspired by Mr. Ralph, who trained him for 15 years. Along with pursuing his love of bodybuilding, Jerry finished his studies. He graduated from Warren High School. In his homeland, he earned his degree from The Art Institute. He was presently residing in Fairfax, Virginia.

We discovered about Jerry Ward’s family after his death that his mother had also passed away previously. His mother and he shared a special bond. He acknowledged his mother’s passing a few months ago on his Instagram. Nothing else on Jerry’s family or parents has been made public aside from this. He has shared the names of his cousins, Tiffany Napolilo, Tricia Yergeau, and Beth Ann Roy. Overall, he was an American citizen who never wavered in his loyalty to it.

Jerry Ward was married, although he was not a parent. Erin Merritt, a woman, was his wife. On September 18, 2016, he wed Erin. He used to share a photo of himself and his wife on their wedding anniversary every year.

In her bio, his wife mentions having worked for IHVI-CVOR in the past. Since Jerry and Erin got married, neither of them has given birth to any children. Both have been contentedly cohabitating for several years. On her Instagram feed, Jerry’s wife typically shares inspirational remarks.

You may also like to know about: Dallas McCarver Bodybuilder, Bio, Wiki, Age, Dies, Salary, Family, Net Worth, Girlfriend, Height

Before we reveal Jerry Ward’s career, allow us to first inform you that he has previously worked as a wrestler. He used to wrestle under the alias Luciana Bagwell. Jerry has shared this information regarding his professional wrestling history on his Facebook page. Aside from quitting wrestling, his career is bodybuilding. Jerry began working with those who wanted to improve their physical appearance.

He identified himself as a personal trainer and life coach in his biography before passing away and was also a Head Judge and an NPC National. Jerry continues to serve as an IFBB judge and also was the proprietor of GIF Labs and Bios3training. Jerry had a large fan base when he operated the “bios3trainign” YouTube channel. He participated in the Lehigh Championship in 2007 and finished second in the Heavyweight division.

In 2007, he established his “bios3traiing” business. He continued to serve as Primeval Labs’ spokesperson in 2015.

Jerry Ward maintained his excellence as a competitor, judge, expediter, head judge, and PPV commentator during his time in the NPC and IFBB Pro League. Jerry had extensive knowledge of the bodybuilding sport. He made comments on the Live Stream of the NPC Teen, Collegiate, and Masters Nationals before his passing. On his website “nutritionsolutions.com,” he also used to sell food.

Jerry War has enjoyed a wonderful life and the support of the community thanks to his successful job. With his bodybuilding career, he has not only amassed a large frame but also a respectable salary.

Jerry had a respectable net worth of $1.4 million USD. His work as a coach, a YouTuber, and the sales of nutrition-based items on his websites all contributed to his huge income.